Are there sufficient levels of Trace elements in your anaerobic digester?

Do you have a balanced diet? All the important nutrients and elements that allow you to perform at your peak? Or do you need to take supplements that provide those missing nutrients or elements?

Just like in the human body, the different biological organisms within an anaerobic digester need sufficient levels of various trace elements and nutrients to perform efficiently. In this case, to digest the feed that enters the digester and provide valuable methane. Different trace elements allow the biology to perform the following functions; 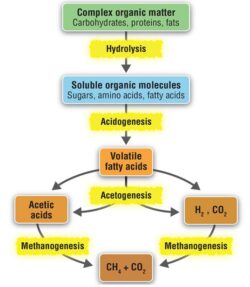 Not only must there be the presence of these different trace elements, but there must also be the correct amount. The correct blend of trace elements that match the deficiencies present is important for the healthy maintenance and processes that the different biological organisms perform within a digester.

Depending upon the nature of the feed there may be sufficient levels of a certain trace element but another one may be highly deficient. These core trace elements will include Cobalt (Co), Molybdenum (Mo), Nickel (Ni) and Selenium (Se) amongst others. And each core element will support the biological organism or enzyme to meet the various functions within a digester.

The Nutromex TEA Plus range includes different products with a significantly increased concentration in one of the trace elements already present. The use of these products will facilitate improved augmentation of individual trace element concentrations deficient in the digester.

OMEX Environmental has fully equipped, in-house laboratory facilities and technical knowledge to recommend the correct TEA Plus product to achieve optimum plant performance. These products will be able to address deficiencies while maintaining other trace element concentrations at satisfactory levels. If the levels of trace elements become too high or an ineffective blend is used, these elements can become toxic to the biological organisms, thus it is important to ensure that the supplementary nutrients dosed to the plant are within optimal levels.

The Nutromex TEA Plus range will not only cover the deficiencies and maintain trace element levels, but the product has been engineered to ensure safe handling by AD plant operators. The various trace elements are bonded in chemical structures within the products, in a way that allows for easier absorption and consumption by the biological organisms, allowing for greater access of these elements to the organisms.