This short study presents the benefits from using one of OMEX Environmental Ltd’s products in the Active Fe range to increase methane production, reduce hydrogen sulphide and reduce injected aeration rates in a biogas plant.

Hydrogen sulphide is one of the gases produced during the anaerobic digestion of organic feedstocks across all sectors where this technology is implemented; Industrial, municipal and agricultural. This gaseous compound contaminates the produced biogas stream and in high concentrations can become toxic to the digester health when in solution as sulphuric acid, and if not treated in time, will inhibit the biogas and methane production. It can also be corrosive to the digester tank when found in high quantities in the digestate, as it accumulates in the digester and attacks the concrete and steel or mechanical moving parts of the process. It is odorous when there are gas leaks from a digester or surrounding infrastructure, making it a highly toxic gas even at low concentrations in the air, which presents many hazards for the operators. It is a high-risk contaminant when it develops in a CHP engine or a biogas upgrader, quickly causing mechanical parts to fail. Hence, many OEMs are putting restrictions in the amount of hydrogen sulphide.

To counteract the problems and considerable process issues associated with the formation of Hydrogen Sulphide, many deterrents have been used since the development of the biogas sector. The traditional solution would be to use a ferric salt in a liquid form like ferric chloride. Although in principle this would be a good solution to the problem, the biogas sector soon realised that even this came with its own set of issues. The low pH value of the product is one of the overlooked parameters, which would have a detrimental effect to the process resulting from when a liquid iron salt is added to a sensitive environment designed to operate in neutral pH values. The low pH quickly starts acidifying the digestate which causes an inhibition to both the biogas- and methane-production biochemical pathways. In addition, the input of chlorides into the process in high quantities, inhibits the anaerobic digestion biology, as chlorides would form metal chloride compounds in the digestate. Very often, this can cause salt toxicity in the digester, which in turn can

As the environmental and health and safety at work regulations have become more stringent over the years, the regulation of liquid iron salts has increased because of the health hazards they presented due to their natural, chemical and physical properties. Later, activated carbon filters were used downstream of the digester to treat the hydrogen sulphide out of the biogas stream and provide clean gas for the downstream purification or conversion processes. However, the financial strains of such an investment for infrastructure as well as the operational costs surrounding the media change, regeneration, or disposal as a hazardous waste, make this into a less of a viable option for many anaerobic digestion plants.

OMEX Environmental has always designed, developed, engineered, manufactured, tested and supplied the market with non-hazardous, cost-effective products to bring maximum effect in the simplest way and with minimum hazards for the operators and the site. This principle is applied across all sectors that OMEX Environmental is active in.

Following a high market demand for OMEX Environmental to supply a product that would help overcome all issues associated with traditional hydrogen sulphide deterrents, but also provide an effective solution for the hydrogen sulphide as a problem itself, we launched the Active Fe range in 2016.  Further to laboratory- and field-testing of products suggested, we developed a range of powdered, non-hazardous, reactive iron-compound blends. At the time, this was a unique product for the market and since then it has managed to shift the mentality around handling the issue of hydrogen sulphide in anaerobic digestion processes.

The Active Fe Range consists of three (3) products, each one with unique abilities for their intended application. The Active Fe33, which is a fast-reacting product originally intended for digesters with low retention times. The Active Fe43, which is a more moderate-reacting product but with a set of unique properties that show monitorable effects in a short space of time and the Active FeMAX, which is a slower-reacting product, very high in iron concentrations. All three products aim to achieve the same dual-purpose result; reduction of hydrogen sulphide and augmentation of the available nutrient-iron levels in the digester.

Before the products were introduced to the market, it was necessary to prove their operational capabilities in real operating conditions. In cooperation with various anaerobic digestion sites, who kindly agreed to take part in this set of monitored trials, the results proved the Active Fe Range to be a strong asset in reducing hydrogen sulphide levels in the digester, promoting the methane production pathways, as well as helping reduce the amount of air injected into the biogas plant to keep hydrogen sulphide at bay.

For the purposes of this short study, a small on-farm plant was chosen.

This plant is a mesophilic range, dual primary digester, parallel-fed, continuously operated plant with a gas mix system for the agitation of the digesters and a CHP engine to convert the produced biogas to electricity for export to the network. The plant feed consisted of three main silage types; grass silage, wholecrop wheat silage and wholecrop maize silage. Due to the operational parameters of the primary digesters, the product chosen for the trial was Active Fe43. The plant was monitored for a few weeks before the first addition of Active Fe43 and daily onwards on the online site monitoring system as well as through digestate analysis provided by OMEX Environmental. The graphs in the paragraphs below show the progress of the trial and the data was supplied by the site’s online monitoring system.

In the weeks prior to the addition of Active Fe43, the digesters were generally operating in the region of 200ppm to 400ppm as the high cut-off level for the CHP engine. The designed aim for this application was to reduce these values in both digesters to 100ppm or below and assess the resulting plant performance. The trial was agreed to last for four (4) weeks while operating with the minimum required amount of iron added to the digesters. Active Fe43 was added in three different stages at different quantities, while keeping all other operational parameters stable, so that the net effect of Active Fe43 in reducing hydrogen sulphide could be shown. The results have shown that the plant could operate successfully at ca. 50ppm consistently by adding the equivalent average of 5.5kg of Active Fe43 per day.

Aim 2 – Assess the methane content in the biogas stream

In the weeks prior to the addition of Active Fe43, the digesters were generally operating in the region of 49% – 50% methane content in the biogas stream with uncontrollable and inconsistent spikes in the methane content. The results have shown that the net methane content gain during the first application reached an average of 1% and was continuing its increasing trend as the monitoring of the trial was coming to a close. 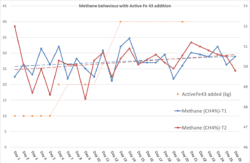 This was a parameter, which was not in the original trial planning, hence it was not monitored prior to the addition of Active Fe43. It was agreed that it would be a trial-in-a-trial to assess if the biology can sustain the hydrogen sulphide reduction in the absence of injected air, which would produce a reduction of the parasitic electrical load on site, leaving higher net quantities of electricity for export. The results have shown that the air injected could be reduced by at least 25% while Active Fe43 was added to the process. This was an additional proof of the quick and sustainable effect of adding Active Fe43. 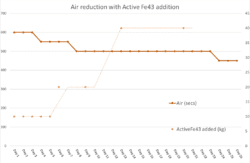 The addition of Active Fe43 to this anaerobic digestion plant produced results that have proven the operational capabilities of the product. The hydrogen sulphide levels were successfully minimised using the least amount of iron required per day, the biogas stream became richer in methane levels and the product properties proved that the plant could operate with lower levels of injected air.

OMEX Environmental supplies this range of products as a non-hazardous, cost-effective solution for optimising the performance of anaerobic digestion plants and, amongst the other products in the portfolio for the biogas sector, fully supports it technically with a dedicated team and an effective laboratory support service.